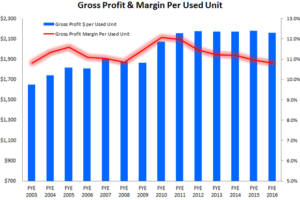 Carmax makes billions buying cars from Peter and selling them to Paul.

Despite the big name brand, mega stores and industry of analysts paid to pore over the mathematical minutia of this publicly-traded used car cash-cow, let’s not overlook the simple truth behind the business of CarMax: billions are made by carmax buying cars from you then selling them to someone else for big profits, and that’s money you could see more of when you’re ready to sell your vehicle.

What does it all mean?

CarMax plans to open 17 more stores within the next 12 months, eight of which will be within its fiscal 2017, and if it keeps its SG&A expenses under control while bringing back its tier 3 consumers to improve same-store sales, the company’s growth story should resume [..]